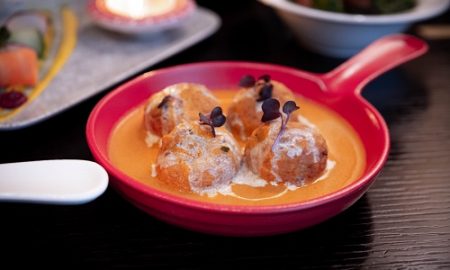 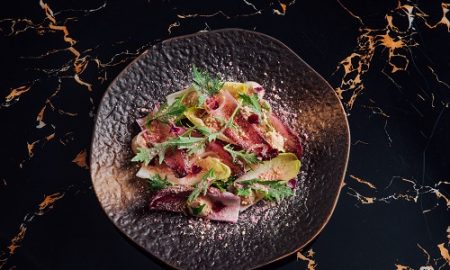 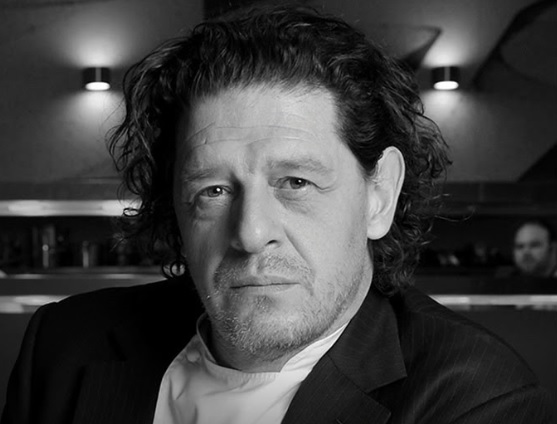 Very few chefs inspire the reaction in people that Marco Pierre White does. Born on a council estate in Leeds, a northern city in the United Kingdom, Marco Pierre White lost his mother at the age of six, a defining moment in his life. The kitchen became his home. He was the youngest chef to ever be awarded three Michelin-stars, which he then later returned in 1999.

I enter the restaurant and find Marco casually chatting away. As I introduce myself, he stands up and shakes my hand. I’ve just about sat down when Marco tells me, ‘I hear they took away a few of your questions’.

Leanne: Yes, yes, they did (still slightly seething from the issue).

Marco: I want them reinstated, because one thing I am not is a coward. I believe in the truth, be it the truth in print or truth on a plate.

Leanne: (Feeling slightly smug) You recently got some heat for saying women are more emotional than men in the kitchen, would you like to set the record straight on this?

Marco: Can I ask, have you seen the original article? (Marco passes me the article, points to the section with his quote) This is what I said.

To summarize the article says ‘Women have a better palate because they have a better sense of smell and are more consistent than men, men will try and change a dish because of their ego, a woman will not. A real positive with men is that they can absorb pressure better, they are not as emotional and do not take things personally. Maybe the reason why women can’t take pressure as much is because in a kitchen there might be 20 men and 2 women, so they don’t have that friendship around them’.

Marco: Do you see what the press did?

Leanne: Yes, and therefore I wanted to ask you the question, not to catch you out but to give you the chance to tell our readers the truth.

Marco: I think what is important is honesty and as you can see when you read the entire article, I was being very positive to women in the kitchen. When I used to cook full time, I had women in the kitchen, we never allowed a lady to pick up a pan of boiling hot water off the stove for health and safety reasons and chivalry. Stoves are traditionally designed at a certain height and a man’s upper body strength is stronger than a woman’s, so why would I want to see anyone struggle to lift something and put themselves and the rest of the kitchen in danger? I said women are better than men when it comes to plating and sense of smell which allows them to have a better palate, they don’t take short cuts, men will take short cuts and do tend to rush things. That was my perspective of my time in the kitchen with men and women.

Leanne: Yes. The second question they made me remove, which touches on the famous feud.

Marco: If you like him or not it is irrelevant, you should never allow your emotions to affect your judgment. Gordon achieved three Michelin-stars at a time when to win three stars was very difficult, he achieved what most chefs dream of but never achieve.

From Marco’s answer I get the sense that the rivalry has been parked or at least at this stage of his life he really can’t be bothered with the drama.

Marco: Do you feel that I’ve answered your questions?

Leanne: If you’ve answered me honestly, then I’m happy.

Marco: I believe in honesty, I can’t deal with lies or people withholding, tell me everything, be it good or bad then I can deal with it.

The conversation relaxes and moves away from a celebrity chef, journalist interview and feels more like friends talking as we start joking. At this stage I’m thinking to myself ‘This surely can’t be the same man I’ve grown up reading all these controversial articles about?’ The man sat in front of me is unapologetically Marco, funny, witty, charming, opinionated but very respectful. I begin to gain a very different impression of Marco than the one I’d walked in with.

Leanne: Why have you chose to move away from fine dining?

Marco: The future of dining in my opinion is affordable glamour. People want to have fun when they go for dinner. The top restaurants have made peoples evening about them, they tell you how many courses you are having, they tell you how to eat it, you have one mouthful and they ask if you enjoyed it. Marco’s New York Italian is a casual night out, listen to the DJ, enjoy a drink, have a three course meal or a light lunch, give people options, allow people to dictate how expensive they want to make their outing.

Leanne: Are you going to roll this concept out through more of the Middle East?

Marco: I haven’t thought about it…(pauses) that wasn’t in your question (starts laughing) right stop this.

Leanne: (in full journalist mode) You led me there.

Marco: You led yourself there and I’m like a lamb to the slaughter (laughing).

Leanne: Ok, I’ll behave. Next question, you’ve achieved so much, what do your dreams and aspirations look like now?

Marco: Good question, firstly I achieved little, because it had no value.

Leanne: (slightly baffled) How can you say it had no value?

Marco: Because it was given to me by people that had less knowledge, it’s like you being made journalist of the year and the judging panel isn’t of good calibre. My greatest achievement and I really mean it was being invited to the Oxford Union to address the union. When you leave school with no qualifications and the greatest institution, the minds of tomorrow, asks you to address the union, that’s an achievement.

Leanne: So, what is your next aspiration?

Marco: Firstly, I’ve never been aspirational, my dream is ordinary. We have a choice in life, we can swim in the shallow end or the deep end. I like the deep end, there’s less people there.

Leanne: At the point when your mentors became your competition was that a satisfying moment or did it cause friction?

Marco: I never thought of it, when I worked for those great people it was about supporting their dream and when I went on my own it was about my dream and lets not forget it was the men and woman behind me that achieved those three Michelin-stars, without them I wouldn’t have done it but in return I showed them what their dream could be.

Leanne: If you had to choose power or money which would it be and why?

Marco: Firstly, money can’t buy me what I want.

Leanne: What is it you want?

Marco: Can I buy my mother a dress? A bunch of flowers? Can I take her for lunch? So, where is the value of money. (Marco’s mother had passed away when he was just six years old) Wealth doesn’t mean anything to me it is about self-discovery. Through self-discovery you can discover your true potential. And power, who wants that responsibility, power is something for insecure people. I don’t want responsibility I seek discovery of myself.

Leanne: You’ve been in the industry for years, and we know it can be a challenging place, what is your secret to longevity?

Marco: Longevity is born out of integrity, people condemn me as being controversial, I was never controversial I just believe in fighting for what I believe in. When people knock you down stand up, dust yourself off and push on, don’t let them pick you up, you pick yourself up. That’s something I learnt from my mentors. I had a duty and responsibility to myself to realise my dream and my vision and what I felt was possible within me as a man. Today some people may say I’m ambitious, I’m not ambitious. Ambition is a dangerous occupation, call me a dreamer but I just like making things beautiful, I like making things like my mother, she would make toys and quilts, my true mentor.

Leanne: You’ve been described as everything from a villain to a rock star, who is the real Marco and how would you describe yourself?

Leanne: (Very cheekily) So are you a rock star?

Marco: (Grins) I’m not answering that question, I’m just saying. As for a villain, I would never say I was a villain, I’m not dishonest. Even when the PR agency removed your two questions, I wanted them put back in the interview because I’m not a coward, I’m many things but not a coward. That’s why I fight for honesty and it is probably why I’ve been condemned so much in the past. If the press wants to call me controversial that’s fine but I fought for what I believed in with all my heart. I came from the humblest side of society, to do what I did in my life, gain those three Michelin stars was just a steppingstone for where I wanted to be. After the age of 32 I started my journey of self-discovery, that is true success and having the confidence to express yourself.

Marco Pierre White is unapologetically Marco, he values honesty and his right to express his honest opinion, however uncomfortable it maybe for others to hear. If Marco had been any other way, he would never have achieved all that he did, and wouldn’t the culinary world be boring without the infectious Marco Pierre White.