Akira Back, A Rising Star 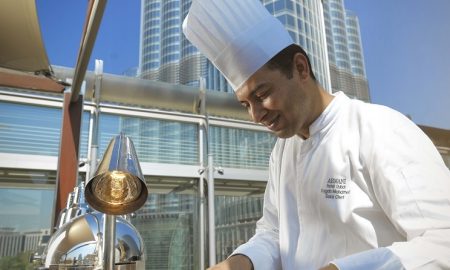 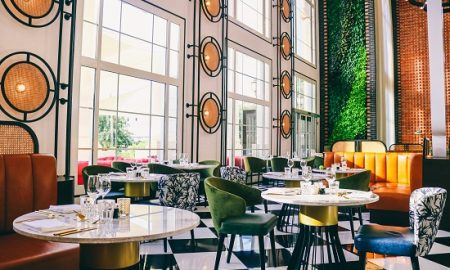 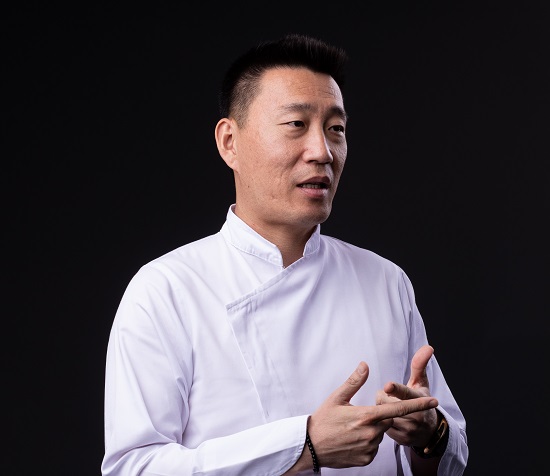 Chef Akira Back is famed for his sense of adventure, culinary creativity and eponymous blend of Japanese fare with Korean essence. Today we are meeting Chef Akira Back at his restaurant, Akira Back located at W Dubai – The Palm.

Leanne: You started life as a professional snowboarder, at what moment did you realized you wanted to be a chef?

Akira: I was born and raised in Korea, so my original dream was to be a professional baseball player, that’s how I got my nickname Akira. Then one day my father told us we were moving to Aspen, Colorado. I was about 13 years old and couldn’t speak a word of English. It was a bit of a culture shock. I started getting into snowboarding to help me make friends and learn English. By the time I had turned professional I was already hungry for my next challenge. All the snowboarders would hang out at this restaurant and the guy there was so cool, I wanted to be like him. It was funny because it was a Japanese restaurant and at the time I couldn’t eat raw fish. I was the worst student ever, if I had someone like me in the kitchen I don’t know if I’d have the patience to teach them. My parents didn’t take me seriously, I was spoiled by my mum and I never cooked at home, I can’t even do the laundry now. I never planned to be a chef, I wanted another option apart from school. People don’t like to hear this but it’s the truth, I didn’t want to go to school I wanted to be creative and express myself, being a chef gave me that opportunity.

Leanne: I understand you were born in Korea and raised in America how has each culture influenced your cuisine?

Akira: I think it is important that I grew up in Korea as it allowed me to understand the foundations of the cuisine. As for America, well that’s the melting pot of cultures, it allowed me to develop a more universal palate, that’s why my food is unique. I’m not fusion, we don’t do fusion, my cuisine is a reflection of me, and my restaurants understand the tradition of the food.

Leanne: You have a variety of concepts. How do you think of these concepts?

Akira: Well, I wish I could tell you it comes to me in a dream, it would sound very exciting but that’s not the case. I take what I love, say a lounge, but then I look at what I don’t like about lounges, for example lounges offer great beverage menus but normally disappoint when it comes to the food menu. So, I ensure our lounges have good menus, both food and drink. Plus, I always like to make my concepts a little bit different. Recently I opened a Chinese restaurant and I put a karaoke room in the restaurant because I always felt Chinese restaurants where so stiff, I wanted to bring some fun to mine.

At this point Akira is focused on the private dining room in the restaurant.

Akira: You know what, perhaps we’ll take that private dining room and make that a karaoke room. I think the crowd at W Dubai – The Palm would like that. Today people want to have fun, they like to experience something memorable. The fact that I travel so much also helps me develop my ideas, that’s why one day I want to have my own hotel.

Leanne: Where would you want to open your first hotel?

Akira: The first opportunity I get to do a hotel I’m taking it, I’m not to fussed about the location, I know I could do something really cool and funky.

Akira: One day I got a call, I didn’t know the people, but they called and ask me to do a tasting. They wouldn’t give me any details about the restaurant location or concept and at the time I was working at Nobu, so I declined and told them I was happy where I was. Four months later they came back but by then I found out the location. They told me they hadn’t found the right guy and still want to meet me. So, I went there and was asked to make six dishes, I said no, I didn’t like the dishes they asked me to make, they loved my reply. I made them a few of my own dishes and they loved it. Then this English guy showed up, big personality, proper old school geezer, that was an interesting conversation, we signed that day.

Leanne: What do you think of the culinary scene here in Dubai?

Akira: Dubai is unbelievable, everybody is here. I feel very lucky our restaurants are well known, have been getting great reviews and becoming busier by the day. I think Dubai has one of the best culinary scenes in the world. Dubai is an important market for me we waited eight years to get a great restaurant location. I come to Dubai often, this is my fifth visit this year, next year I’m going to take a few recreational days to see what’s new on the culinary scene.

Leanne: You have twelve restaurants in the pipeline, that’s an impressive amount, tell us a bit about them.

Akira: We got San Diego, San Francisco, two in Dallas and three restaurants in Boston. 2020 is a big focus on the USA, then next year we open our restaurant in Europe, I’m so excited for this location, it will be in Paris, it is a dream come true, the location is unbelievable, honestly the location is crazy.

Leanne: Can you give us more details?

Akira: Lol. No. I can’t its not been announced yet but trust me when I say it is one of the best locations. The design is almost finished and we should be open by June, so watch this space!

Leanne: You were awarded your first Michelin star for your restaurant in Seoul how important was that for you? And are you striving for more stars?

Akira: I heard a rumor that Michelin was coming to Seoul, so I thought that’s it, I’m going home to get a star. I wanted to prove to people that we could get a star. I went and found a space one block from where I grew up, I didn’t do any research and paid triple for the space. Later I found out if you wanted to open a restaurant to needed to have a Korean partner, I didn’t want a partner I wanted to do it my way, so I had to apply to get a green card. The restaurant was four months behind schedule, rent was sky high and pretty much everything I did was wrong. It was the stupidest but the best thing I did in my life. But we got the star. Dosa’s concept lends itself to Michelin, a small seater restaurant with a focus on great produce. As for more stars I’d actually like to close Dosa and open it again in another country and get another Michelin star, that would be really cool. Proving that we can move Dosa and the same team anywhere in the world and still get a Michelin star. London would be a cool place to try it.

Leanne: What inspires you when creating a new dish?

Akira: I like to make food that’s very easy to eat but visually stimulating at the same time, then I work on the flavor, sometimes it’s a quick process and sometimes its slow. The pizza we serve here took a long time to perfect; the whole process took six to seven years but then there is one dish that only took me three minutes to make. I find inspiration everywhere, for example Las Vegas, to me Vegas is pure sound, from coins to slots, I wanted to capture that in a dish, so I created a dish with popping candy. Dietary trends also play a role, our menus are inclusive, we look to cater for all so that people can just come here and relax, if you are for example, vegan or gluten free, we can cater for you.

Leanne: You’ve done lots of TV shows, what is your most memorable TV experience?

Akira: Iron Chef, I grew up watching the show and I lost when I was on the program, that fueled me to do better. That show made me grow up, I went there a very long time ago when I had no name, it was a big learning curve.

Leanne: Would you look at doing your own TV show?

Akira: Yes! 100%, I’d love to do a show about me travelling the globe and opening new restaurants. People could see how you open a restaurant in France in comparison to Dubai. They could see the drama of the restaurant and how to build a successful restaurant brand. I’d love to be able to educate people and show them the A to Z on how to open a restaurant, from finding suppliers in different markets to finding locations, I think that would be really cool.

Akira Back is a true rising star, a driving force in the culinary world his effort and determination to succeed are nothing but short of infectious. We can’t wait to learn more about his new restaurant in Paris and be sure to watch this space, Akira Back isn’t slowing down anytime soon.

Dine at his restaurant Akira Back at W Dubai – The Palm and enjoy an adventure for the soul, with the energy behind-the-scenes fueling the flavors. Diners can expect modern Japanese cuisine with a Korean and international essence prepared with seasonal produce and artisanal sourced ingredients. Japanese cuisine aficionados can indulge in mouth-watering and eclectic fusion dishes from Duck Prosciutto and Filet Tobanyaki to Lamb Chops and Gambero Prawns. 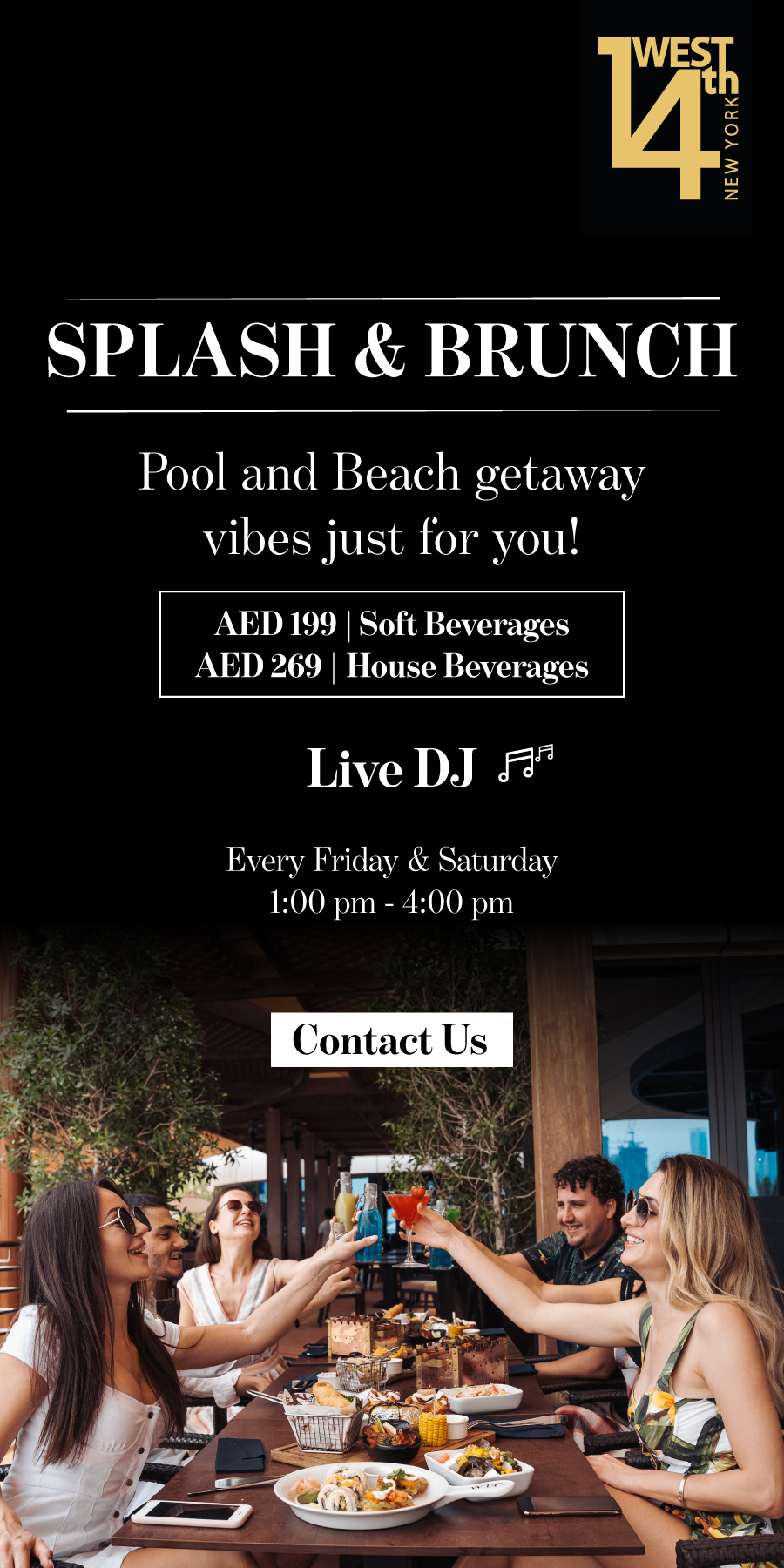